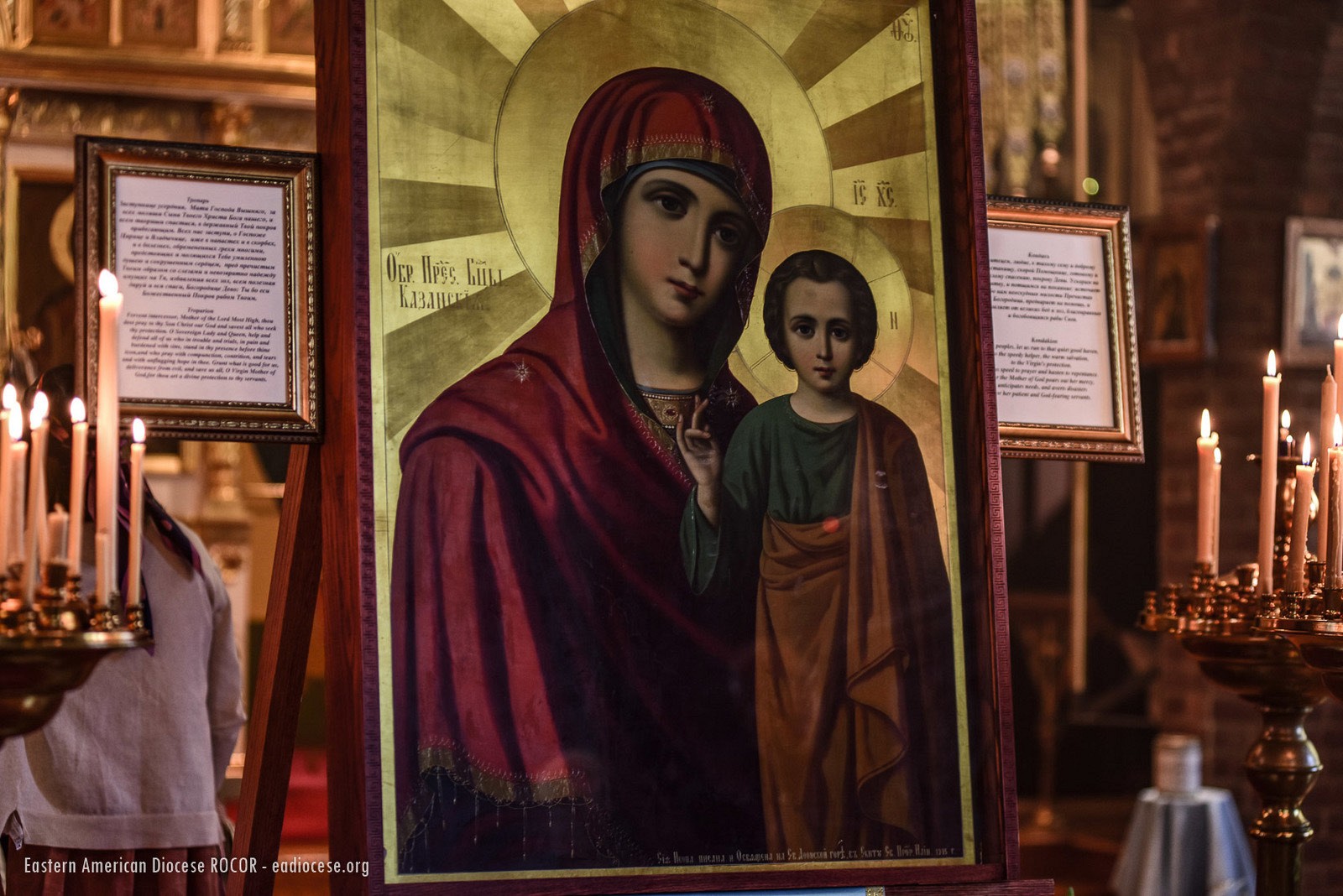 The Kazan Icon of the Most Holy Theotokos

After seizing Kazan in 1552 on the feast day of the Protection of the Mother of God, Tsar Ivan IV "the Terrible" ordered the construction of a cathedral in honor of the Annunciation of the Most  Holy Theotokos. He also indicated other locations for the construction of churches and established the Kazan diocese. After a horrible fire in 1579, it was here that the Most Holy Mother of God revealed her Miracle Working icon.

Several times, the Mother of God appeared at night in a dream to a devout girl named Matrona, daughter of an archer, and instructed her to tell the archbishop and governor to unearth Her icon from a place that she indicated. In the beginning, no one would listen to the girl. However, when the Mother of God appeared to her a third time, the girl became afraid and on July 8 (old style) she and her mother took a spade and began to dig at the site of the burned down home of the archer. It was Matrona that found the cherished treasure which was wrapped in a red colored cloth. The face of the icon was fresh and undamaged, as if the icon had just been painted.

A solemn procession was conducted from the location of where the icon was found and it was transferred to the church of St. Nicholas of Tulsk. Its rector was the priest Germogen, who later became Metropolitan of Kazan and then Patriarch of All Russia, and who died in a troubled time for Orthodoxy (his feastday is celebrated February 17 / March 2). He documented the event of the icon's appearance. A celebratory moleben was served at the church of St. Nicholas of Tulsk and the icon was then carried to the Annunciation cathedral. The first miracle occurred along the way: a man named Joseph who had been blind for three years had his sight restored. Once inside the cathedral, another blind man - Nikita was healed. Subsequently over time it was noted that the Kazan icon especially grants healing to those who are stricken with eye illnesses.

Having received news about the appearance of the Kazan miracle working icon with an exact copy of it, Tsar Ivan IV ordered that a new convent be constructed for forty nuns at the site of the icon's appearance to serve as a place for its safekeeping. The girl Matrona and her mother were the first to receive the monastic tonsure in the new convent.

The construction of a new extensive Dormition Cathedral was begun in 1594. It was consecrated the following year by Metropolitan Germogen. The number of nuns at the same time grew to 64 persons. Generous contributions were made - liturgical items, icons, vestments. The icon was overlaid with royal gifts - gold, precious stones and pearls. The icon was embellished with new magnificent adornments from Empress Catherine. During her reign, it was decided to build a new church in the place of the older one (two hundred years). This new church was founded in 1798 at a cost of 25 thousand rubles issued by order of the Empress. The Kazan icon began to be worshipped throughout all of Russia and copies of it appeared in thousand of churches.

The Kazan Icon of the Mother of God inspired the Russian armies during the "Time of Troubles" and the liberation of Moscow from the Poles on October 22 (old style) 1612. In 1709, Emperor Peter I prayed before the Kazan icon for Russian victory on the eve of the battle of Poltava (this icon is currently located at the Kazan cathedral in St. Petersburg). In 1812, Prince Mikhail Kutuzov prayed before the miraculous icon on the eve of his departure to the battlefront.

During the night of June 29 (old style) 1904, thieves broke into the cathedral of the Kazan monastery looting it. They took the miraculous Kazan icon with them. These men were found, but the icon disappeared without a trace. The fate of the original icon is unknown. However, copies of the Kazan icon became well-known. They are located in Moscow and St. Petersburg. All three icons are venerated and worshipped as wellsprings of Divine Grace and are considered miraculous.

Most Holy Theotokos save us!